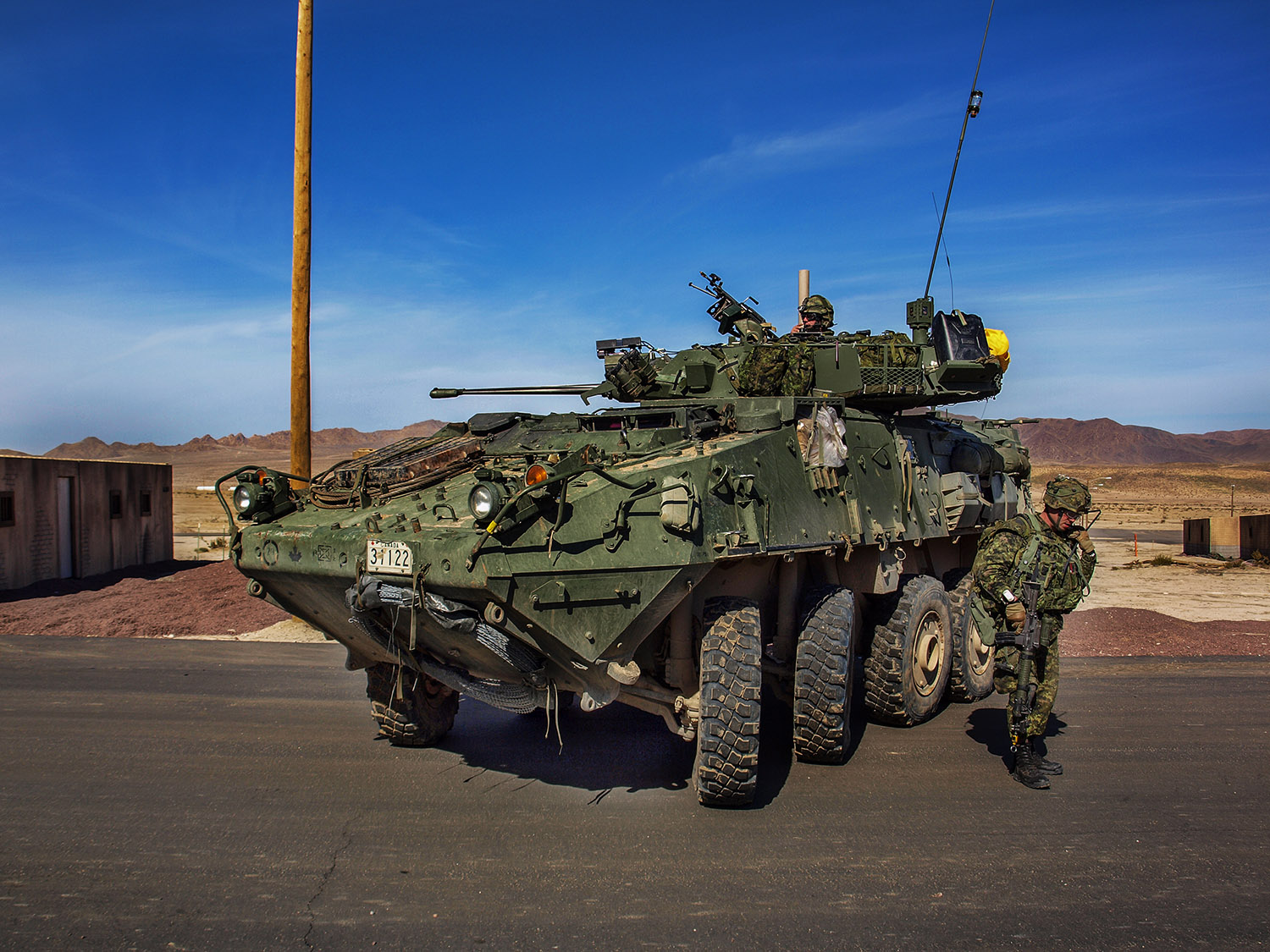 MY WEEK IN THE MOJAVE DESERT WITH THE TROOPS wasn’t, strictly speaking, anybody’s idea of a vacation. There wasn’t much luxury to be found at Fort Irwin, where I spent a few days with one of the last groups of Canadian soldiers being deployed to Afghanistan. It was, however, a spectacularly scenic place, in circumstances that didn’t resemble my daily life, so by my very loose definition of the word I’d call it tourism.

I’d been invited at the last minute by a friend in uniform to fill a seat on a plane taking a group of journalists to the U.S. Army’s National Training Center, as guests of the Canadian Forces and the Ministry of National Defence. I’d be the only freelancer on the trip, and it would be my job at the end to try and find a home for whatever story I’d write. Ultimately there were no takers for either my photos or words – another reason why my week in the Mojave ended up being a travel story.

We left Toronto in one of the four Challenger executive jets in the Royal Canadian Air Force fleet and flew across the continent, crossing the mountains of Utah and Colorado before landing at the mysterious Southern California Logistics Airport in Victorville. Formerly George Air Force Base, it is the strangest airport I’ve ever flown through, and not just because of the dozens of mothballed passenger jets parked at the far edge of the runway.

The SCLA had a strange, clandestine feeling, helped no doubt by the blocks of abandoned officers’ family residences just outside the front door of the airport. We didn’t linger in Victorville; after getting cleared by customs and immigration we were packed into a van and passing Barstow on our way into the Mojave. The first line of Fear and Loathing in Las Vegas came into my mind, not surprisingly.

Distances are considerable in the desert, so it was no surprise that we seemed to drive for hours to get to Fort Irwin, and then almost as long to get from the front gate to our quarters. We arrived at the end of the rainy season, so our first night treated us to a torrential downpour – hardly the weather you expect in a desert.

With a bit of downtime the next day I got to explore with my camera. I’d call our accomodations a tent city except these tents were a lot more sturdy than anything I’d slept in amidst the bugs and rain in the Canadian woods. Further out was the barbed wire and guard towers, but they mostly seemed to be there for show – set dressing to remind us that we’re supposed to be in an approximation of a war zone.

My colleagues for the trip were mostly young women, almost all of whom worked in television. They arrived loaded down with gear – cameras, tripods and lights; they were their own crew, and did all of their reporting to a camera locked off on a tripod or held in their hand, selfie-style.

I couldn’t help but marvel at how hard they were working, with half the resources a TV reporter could have relied on a few years previous. Perhaps it was because I was freelancing again after being laid off from my newspaper job the year previous, but our little group of journalists seemed to share an insecure mood as we went about our jobs.

The main camp, with its mysterious facilities built from high tech materials, looked like a sci-fi movie set. After one night in the main camp at the rear we moved the F.O.B., or Forward Operating Base, a smaller, less permanent-looking camp closer to where the troops were actually being trained. Replicas of towns were built in the desert, meant to approximate what troops might find in Iraq or Afghanistan.

If you wanted to be flippant, you might call it the worst theme park in the world. After the slick domes, solar panels and tent cities behind the lines, these battle-scarred Lego towns built from concrete molds and shipping containers maintained the uneasy feeling of being in a movie that wouldn’t end well.

We were stationed on top of a building with our cameras and tripod, next to a group of “insurgents” – US Army troops playing the bad guys, lying in wait for the Canadians making their way slowly through the town with the Coyote armoured vehicles. I can’t imagine just how conspicuous we look in our flak vests and helmets, gawping from the roof.

Casualties are tallied thanks to a complicated system of vests and targeting sensors mounted on the muzzles of guns firing blanks. The whole exercise is as loud as war, but for some reason it never seems as imperative.

We’re taken to witness a parlay held between Canadian officers and their local interpreters and the elders of the town. Afterwards we meet one of the “locals” – a Farsi-speaking Iranian named Ali Nejad who’s part of a cast of villagers. His wife is Afghani, and she persuaded him to apply for the job helping to train troops here at Fort Irwin. He lives in the “town” with the other locals during the exercises, and shows us his shipping container home.

I had a pretty great time at Fort Irwin. Despite names like “Roadkill” and “Shit on a Shingle,” the food in the mess tent was pretty darn good, and even the MREs were tasty. I actually think I gained weight. I’ve had better nights than the ones I spent in a sleeping bag on a cot in the chill of the night in the Mojave, but I got an excellent haircut from the barber at the PX – more like a shopping mall – and scored pretty well at the bowling alley while the ladies from our group drove into Vegas for the night.

And I was impressed by the seriousness with which the soldiers I met – from veterans like Master Corporal Mike McCullough of the 23rd Service Batallion to first-timers like Corporal Stephen Craddock of the Queen’s Own Rifles of Canada – took their training at Fort Irwin. I hope their deployment to Afghanistan was safe and uneventful. And unlike my time in Fort Irwin, I don’t think they’d ever have mistaken it for tourism.

Rick McGinnis was hosted by the Canadian Armed Forces and the Ministry of National Defence, who have not approved or reviewed this story.