I HAVE WANTED TO STAY IN THIS HOTEL FOR YEARS. Built in 1832, the Elora Mill has been a hotel since the ’70s, but closed nearly a decade ago, and has been a construction site every time I’ve visited Elora. (The photos below were taken last year during renovations.) The hotel reopened last year after a multimillion dollar renovation and I was lucky enough to spend a night recently while in town for a job. 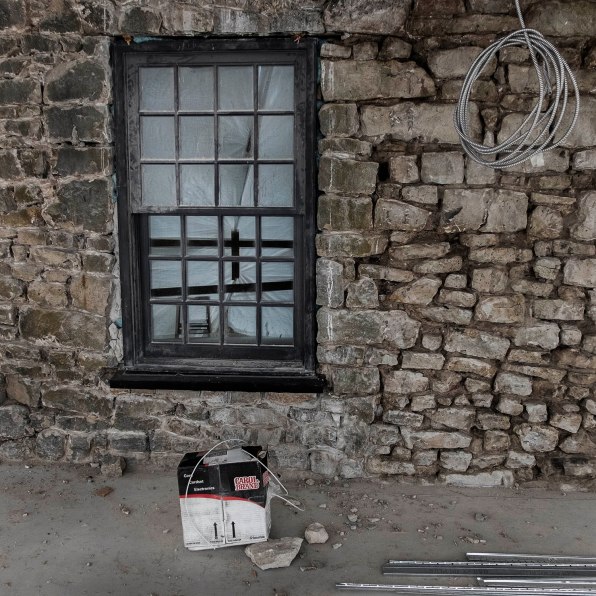 There aren’t a lot of hotels with a more spectacular location than the Elora Mill Inn & Spa. It hugs the bank of the Grand River by rapids that were roaring with spring run-off on the day I stayed. The hotel’s restaurant and the Penstock Bar look out over the water and the “Tooth of Time,” one of Elora’s many landmarks, through wall of windows added during the recent renovation.

The Elora Mill Inn is a luxury property, which was obvious when I checked into a room with a spectacular view of the Grand as it heads downriver into the Elora Gorge Conservation Area next to the town. Everything from the bed linens to the bathroom fixtures were of the highest quality, and amenities included a Nespresso machine and a real wood fireplace. 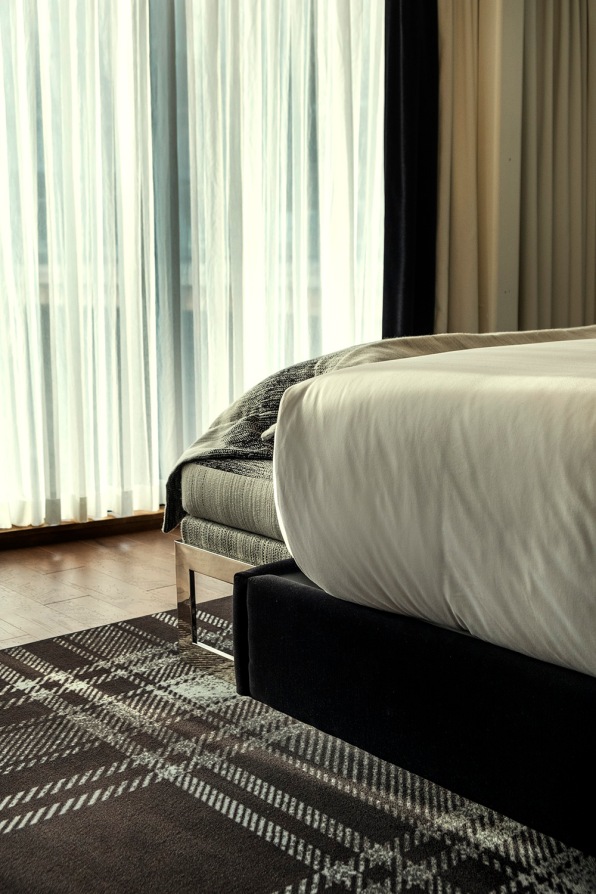 One of the ironies of staying in an architecturally distinguished hotel is that you don’t enjoy the view of the building from the inside of your room. The view of the river from inside the Elora Mill Inn turns that around, since it’s arguable that what you see from inside your room is even more astonishing than the hotel’s setting. This, for instance, is the view from my room at sunset:

The restaurant, just below my room, shared the same spectacular view through floor-to-ceiling windows. Ingredients are sourced locally as much as possible, and includes interesting items such as stinging nettles and sorrel emulsion, but married to accessible dishes and a generous grill menu. They also make a mean Caesar. 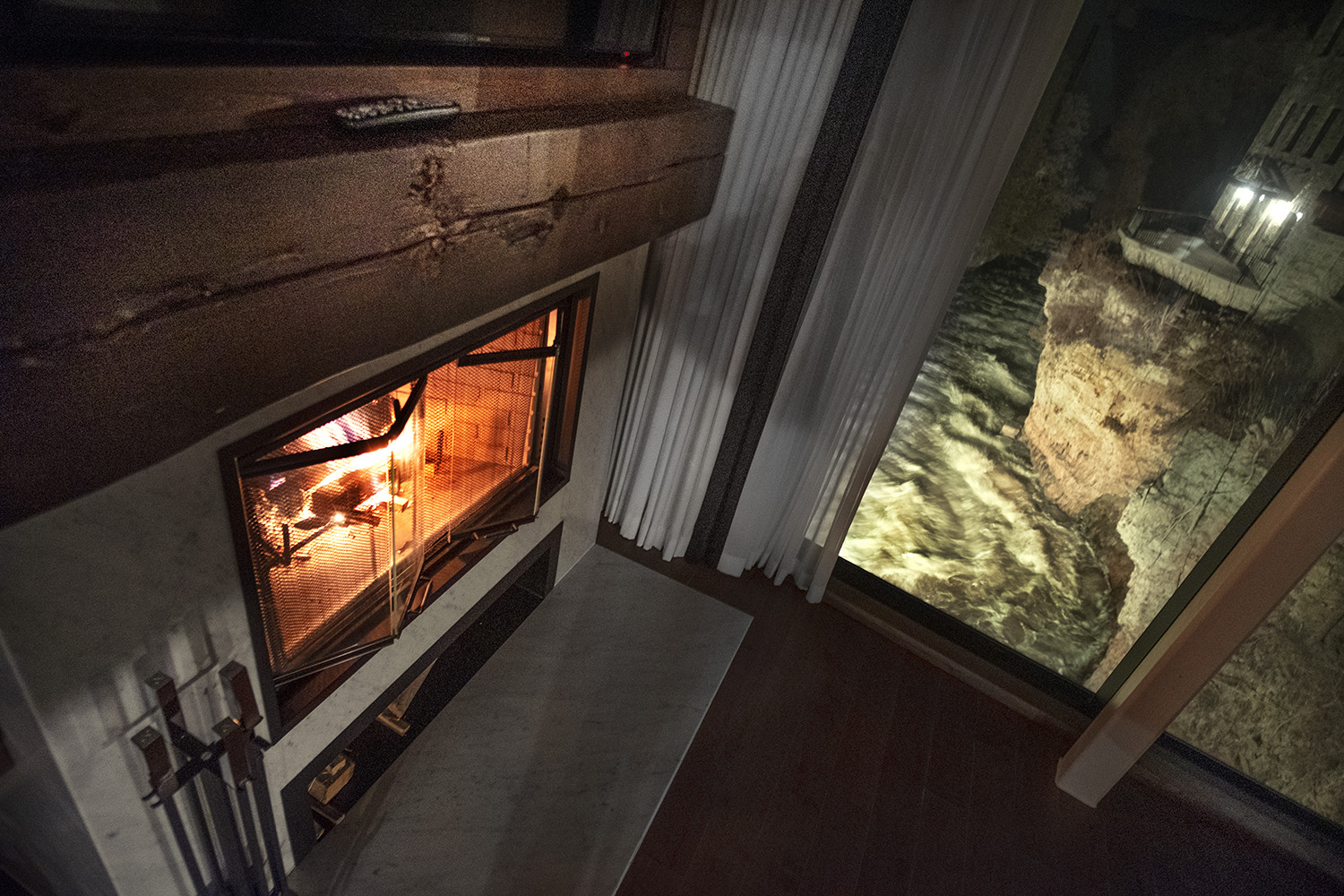 Service at the Mill is excellent; before heading down to dinner I asked if I could get the fireplace in my room lit. There was no point bothering with the TV after that, so I enjoyed the fire and the roaring Grand below me.

I got up early the next morning to photograph the Mill from the other side of the river. Much of Elora is built from stone that looks warm in almost any light but glows in the sun. It’s a lovely building in a lovely town that’s home to a community of artists and an annual festival of painting. 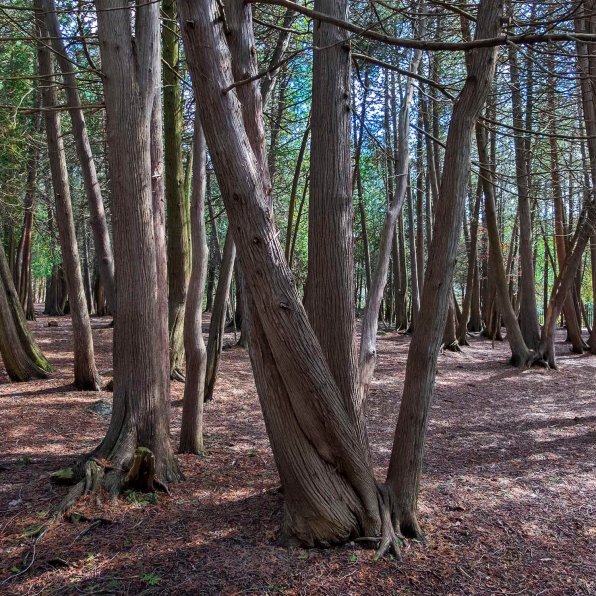 When I interviewed the hotel’s general manager last year, he compared the town and the area to his last job in the Cotswolds. Upriver, the town of Fergus has a different character from Elora – still picturesque, but with more of its 19th century industrial heritage on view – while downriver the Grand slows down, meandering through grassy meadows that I am told are great for trout fishing. 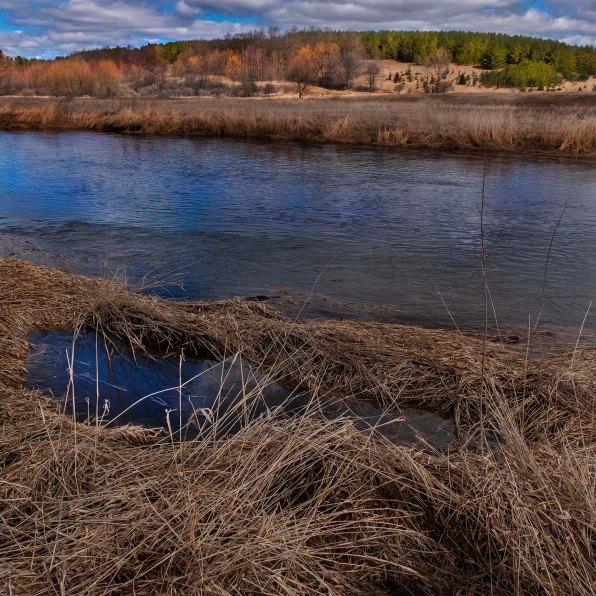 I keep returning to Elora, mostly because it’s a photographer’s dream. Between the town and the river, the Conservation Area and the fields and meadows of Wellington Country, there’s a lot to see from sunset to sunrise, and in almost any season. And thanks to the reopening of the Elora Mill Inn & Spa, you’ll have a luxurious base to work from and enjoy the aptly-named Grand River.

Rick McGinnis was hosted by Elora & Fergus Tourism and the Elora Mill Inn & Spa, who have not approved or reviewed this story.