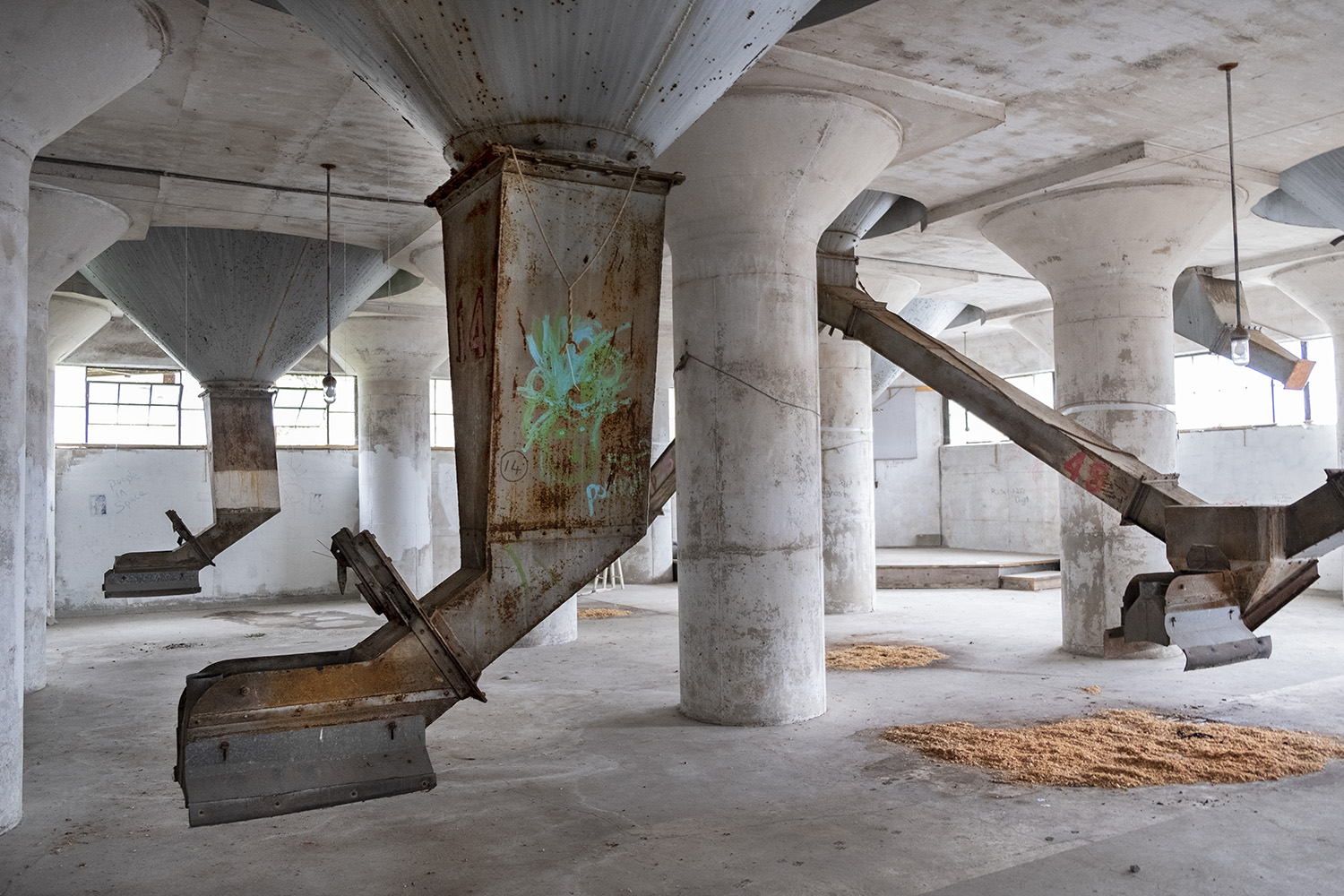 BUFFALO’S SILO CITY HAS BEEN ON MY LIST OF “MUST SEE” DESTINATIONS FOR A COUPLE OF YEARS. Several miles of concrete grain silos planted by the banks of the Buffalo River as it twists and turns along its final stretch, they’re a remnant of the city’s history as a major shipping centre, and were once better known than its architecturally distinguished skyline.

My Uber driver takes me past the historic First Ward neighbourhood where most of the workers at the silos lived, over the Ohio Street bridge to the gates of Silo City – the name officially given to a campus of four different silo complexes grouped around the inside of one of the final twists in the Buffalo River. This is the sort of Rust Belt urban landscape that cities once tried to hide, but Buffalo’s change of fortunes in the last few years has turned these empty grain silos into an opportunity rather than a liability.

Silo City and the Buffalo River from the Ohio Street bridge

I’m here to meet “Swannie” Jim Watkins, the steward and custodian of Silo City. A onetime art student, Watkins spent his life working in factories and manufacturing before a chance encounter in a bar he hung out in with local industrialist Rick Smith, who needed someone mechanically minded to help him convert a bunch of abandoned grain silos he’d just bought into an ethanol production facility.

When the ethanol business turned into a bust, Smith pivoted by turning his silos into an event facility, with Watkins as on-site manager. For seven years, Silo City has been in use as a film location in addition to hosting parties, weddings, concerts, poetry readings and any other event suitable to its rather unique and frankly awesome attributes.

Watkins gives me a quick run-down of the site and escorts me to the entrance to the Perot Elevators (built 1907; decommissioned 1963) before leaving me to my own devices. Silo City offers guided tours of the site from May to October (private tours can be booked as well) but Jim says that most of the photographers that visit like to make their own way around and tells me he’ll be over in his shed by the gates.

Inside the Perot Malthouse, Silo City

I spend most of my time in the two “smallest” buildings on the Silo City campus – the Perot Elevators and Malthouse (built 1907) and the Marine A Elevators (built 1925) at the other end of the site. The truth is that both structures are enormous, and only dwarfed by the adjacent American (built 1906) and Lake & Rail (built 1927; closed 2017) elevator complexes. With unlimited access and Jim’s help, I could have spent all day here. 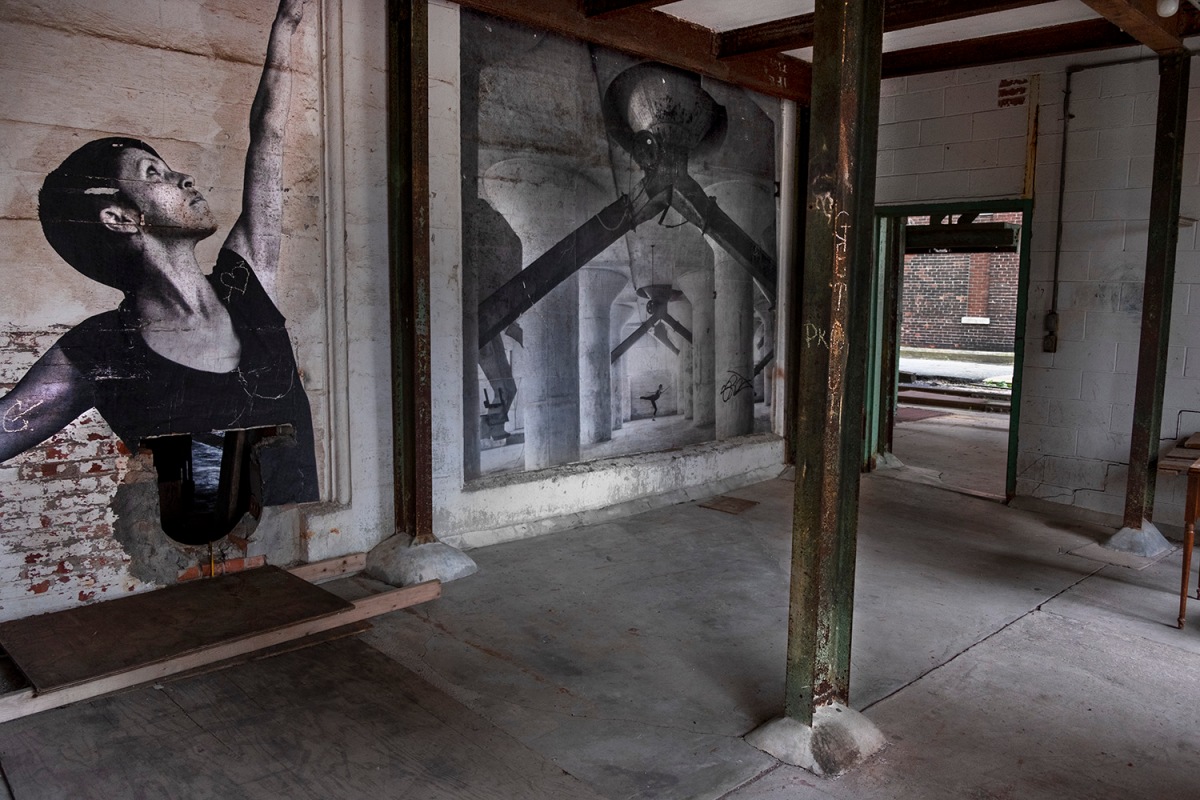 By the entrance to the Perot Elevators, Silo City

Access in and out of the Perot and Marine A silos has been enhanced with wooden stairs, so it’s not exactly the daredevil clandestine experience sought by urbex enthusiasts. There’s plenty of evidence of their use as arts and performance spaces as well, with artwork painted and pasted to the concrete walls.

Inside the Perot Elevators, Silo City

The ground level of the Perot silos is spectacular, with many of the angled chutes from the bottom of the elevators still in place in the remarkably bright space with its gleaming white concrete walls and pillars. There’s a pungent smell of fermenting grain all through the room, which is intact enough to feel like it’s still in use. (It’s a rawer version of the scent of Cheerios that you’ll find nearby in Buffalo.) 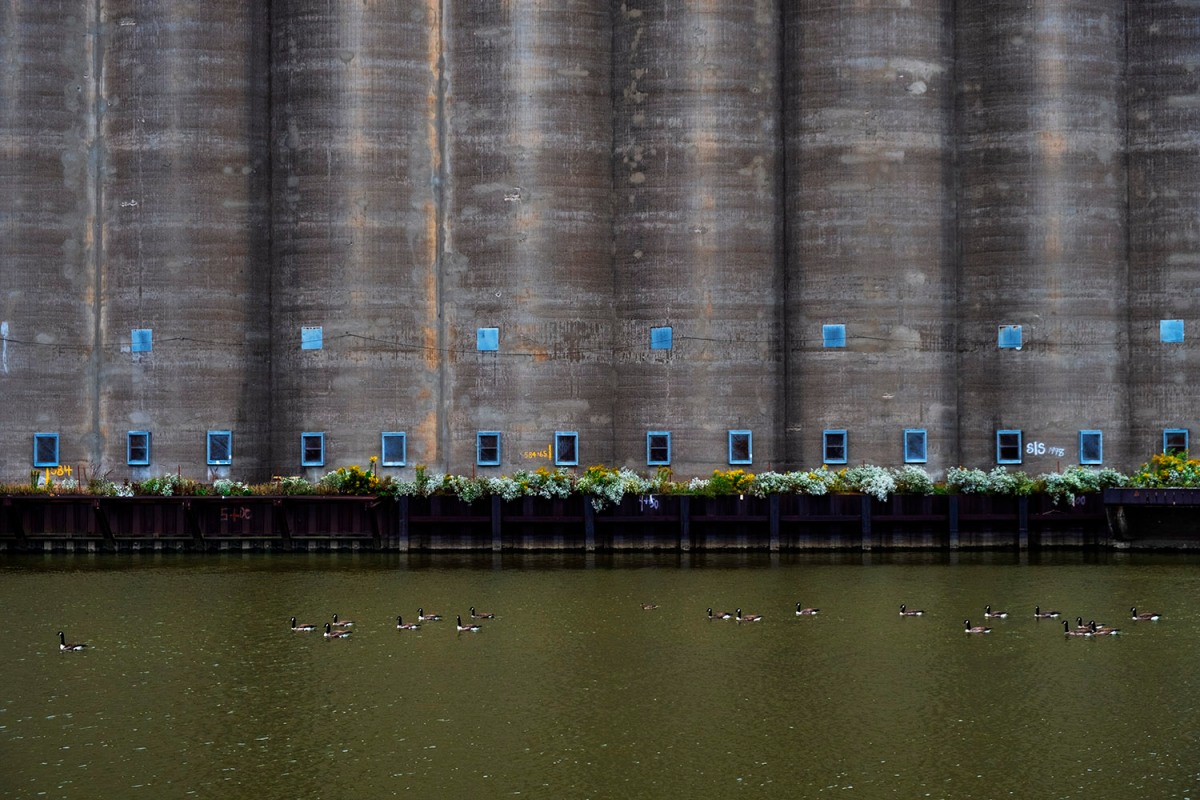 Across the Buffalo River from Silo City 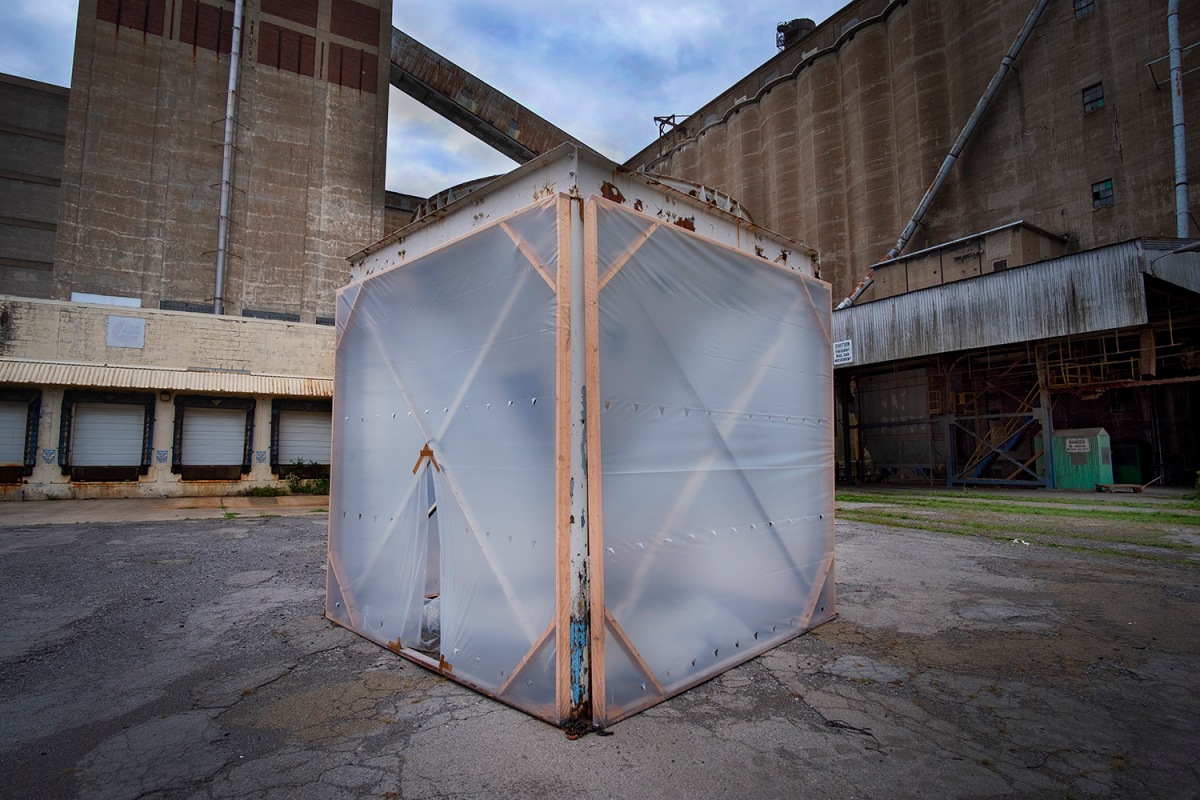 A walk through the site leads from one startling vista to another, from the vast colonnade of columns on the far side of the Buffalo River from the Perot silos to a mysterious cube built of timber and plastic sheeting in the middle of the complex. Maybe Jim could tell me what it is, but I’m content to let it remain mysterious. While I explore, a crew of rowers with their cox bellowing through a megaphone go back and forth past the silos. It’s quiet today, but Silo City is one of two launch areas for kayak rentals on the river on weekends and in the summer. 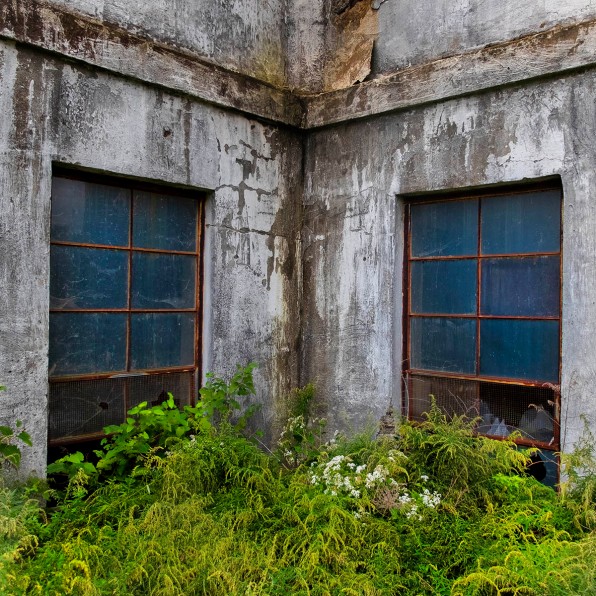 Just by the entrance to the Marine A elevators I notice something unexpected – a ferryboat tied up where ships used to load grain. A floating dancehall, the SS Columbia once plied the Detroit River with its sister ship, the Ste. Clair, but went out of business in 1991 and were deteriorating at their berths when the Columbia was bought in 2006 by a nonprofit group. The Columbia was towed to Buffalo in 2015 on its way to the Hudson River and an eventual return to service in New York City. The Ste. Clair burned at its moorings in Detroit this year.

I enter the Marine A silos through a wide hole in their basement and immediately notice what makes this complex of silos so special. With the bottoms of many of the silos missing, they’ve become enormous echo chambers, and the sound on this quiet weekday afternoon is truly awe inspiring. 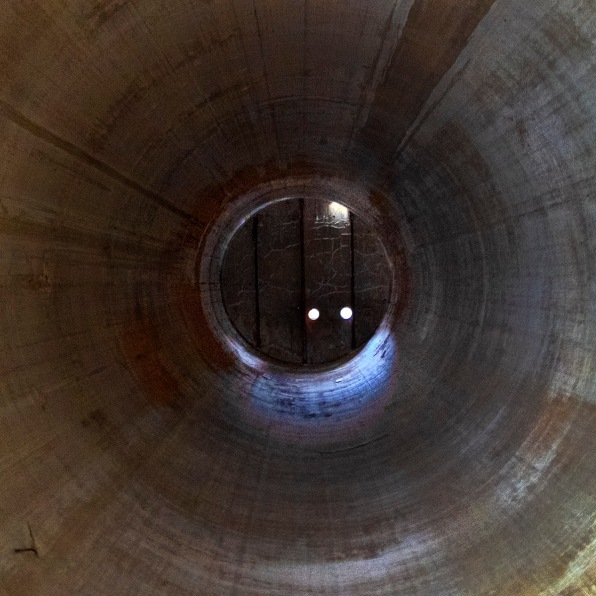 The acoustics have made them the home to the Silo Sessions – concerts and recording events that make use of the silos’ jaw-dropping acoustic properties. They’ve hosted everything from hip hop to poetry to folk, rock and experimental music. (Click on performances by Tatsuya Nakatani, Pam Swarts and Mal Devisa for demonstrations of the unique musical properties of the silos.)

Inside the Marine A elevators

It’s hard to believe that Silo City will stay this way forever. Elsewhere along the Buffalo River the old silo complexes are being renovated into offices and homes, and with the revival of the First Ward and Larkin Square nearby, the city will be sure to pull the silos back into its embrace. Further downriver, Riverworks with its brewery, climbing walls and zip line is an example of quick regeneration, while Silo City is being allowed to slowly find its way back into use. Make sure to go and appreciate its raw industrial charm while you still can. 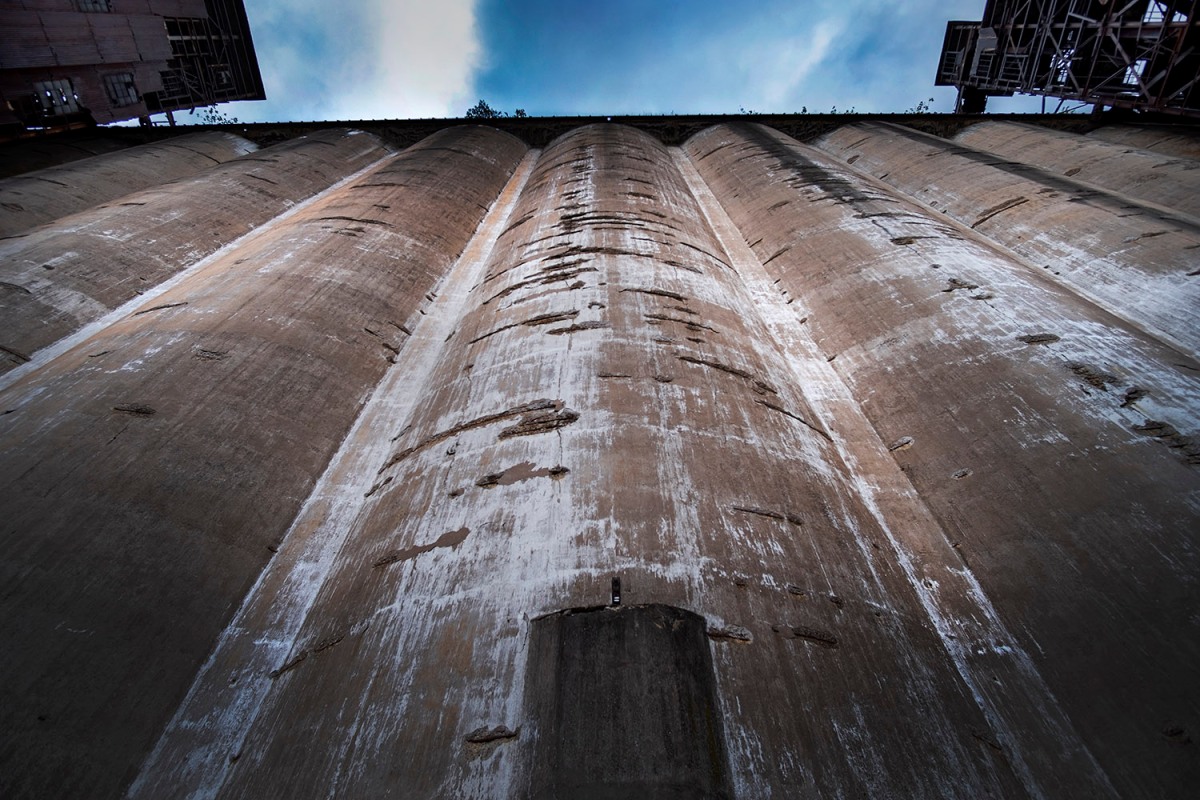 Rick McGinnis was hosted by Visit Buffalo Niagara, which has not approved or reviewed this story.