WINTER HAS COME EARLY THIS YEAR so our fall – brief as it was – had to be savoured quickly and greedily. That meant a trip to Dundas, Ontario and the Spencer Gorge on an October weekend, just as the leaves were turning all over this part of the province. Our objectives were two of the most dramatic waterfalls next to Niagara,and the most dangerous selfie spot in the area.

For the car-less, the best way to see the waterfalls in Spencer Gorge is by Parkbus, which leaves downtown Toronto on Saturday mornings from spring to fall (check the website for dates and times.) You’ll travel by rented school bus so it’s not a luxury trip, but the price is reasonable ($35 for adults, $32 for students and seniors, $18 for children) and Parkbus tour leaders are friendly and helpful.

The bus takes you to the Christie Lake Conservation Area, which has become the marshaling area for visitors to the Spencer Gorge and its attractions, offering a frequent shuttle bus from the parking lot at Christie Lake to the start of the trail by Tews (or Tew or Tew’s – it’s spelled different ways all over the place) Falls and Dundas Peak. 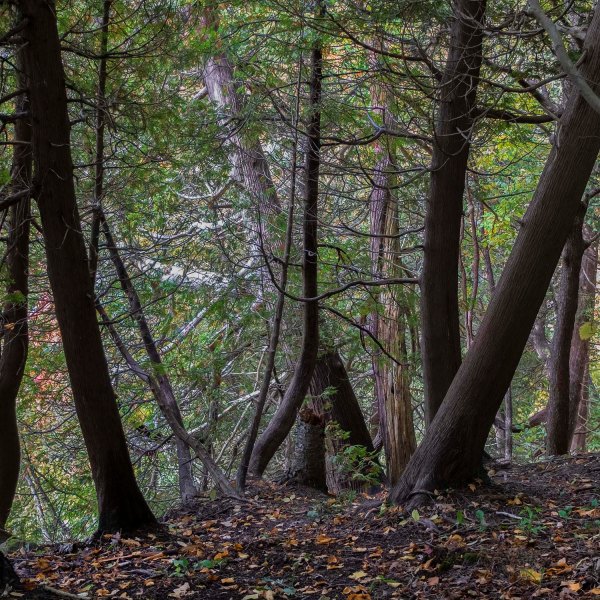 The shuttle bus is in use most of the year because visitors to Spencer Gorge have increased so much that they need to make some sort of effort to control numbers. It didn’t take long to figure out just why. The path along the escarpment is quite lovely, not too different from the trails around the Elora Gorge – thickets of trees on one side of the path, clinging to the edge of the cliff on the other, light filtering through the branches.

It doesn’t take long to reach Tews Falls. It’s a dramatic sight, with water from Logie’s Creek cascading over the edge of the cliff face 134 feet to the bottom of the gorge – just a few feet shorter than the falls at Niagara. It’s a thin curtain of water that can run nearly dry in summer, so it’s best to check ahead before you visit if you want to see it flowing. 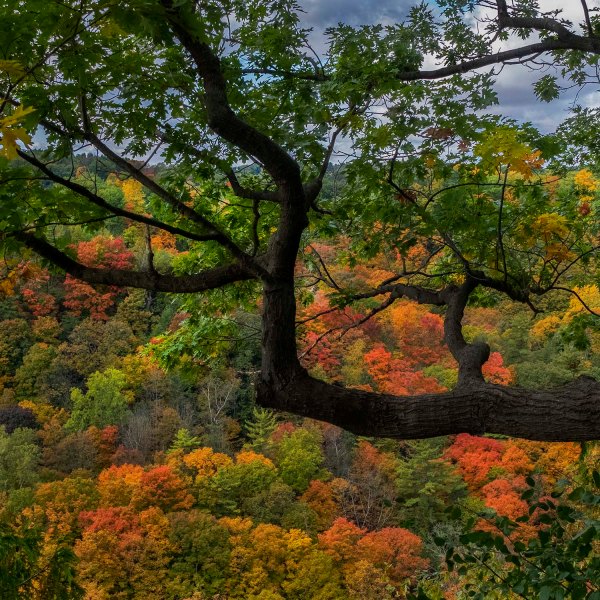 As you head further up the trail toward Dundas Peak you’ll get a glimpse of the fall colours through the trees clinging to the cliff edge. This is the way the conservation authority want you to experience the views, by the way – while it’s possible to hike to the bottom of the gorge to get shots from the base of the waterfalls, the way down and the paths along are more dangerous, and access is discouraged to limit liability (and the rescue of hapless trekkers – a frequent thing according to locals.)

The view from Dundas Peak is remarkable, especially on a day when the woods below are blooming with red, orange and yellow amidst the evergreens. Dundas Peak is full of rocky outcrops that are tempting selfie spots, and on the day Saturday I was there the trails were full of groups of young people eager to inch toward the edge or sit with their legs dangling over to get their version of that shot they’d seen online. 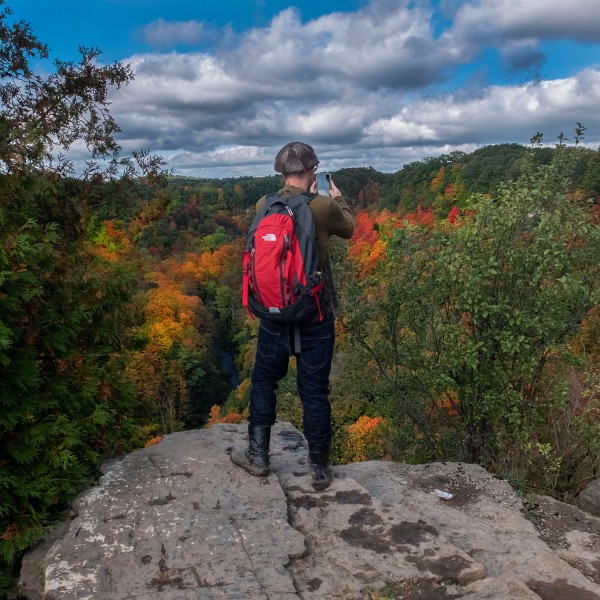 The view is panoramic, taking in the Spencer Gorge below, with a railway line just off centre and the town of Dundas to the left. On a busy weekend with a clear sky, the challenge isn’t so much getting the shot as much as waiting for your place in line to get a moment clear of other visitors in the sweet spots by the edge of the escarpment.

It goes without saying that there have been mishaps and accidents on the peak and the sketchier trails below, between Tews and Webster Falls. Outlooks by the falls have been fenced and secured, but the appeal of Dundas Peak is its vertiginous views, so the Hamilton Conservation Authority has been managing its risk by warning visitors and trying to manage numbers. There might be a day when guard rails will be installed at Dundas Peak, but right now visitors have to rely on their common sense, and note carefully that the turkey vultures soaring along on the wind right in front of them are riding on currents of air over a hundred feet above the ground. 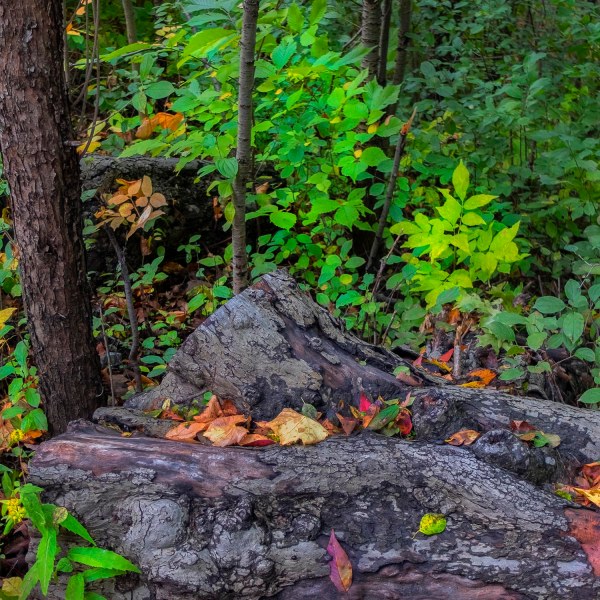 Another shuttle takes you from the entrance to the Tews Falls trail to the trail by Webster Falls. Don’t ignore the forest by the paths while you hurry to the big views – there’s a real beauty to details beneath the trees in the woodlands of Southern Ontario. These are forests that, while not as managed as those in Europe or as raw as the vast wilderness of the Canadian Shield to the north, have their own random and fleeting tableaux, especially when newly turned leaves start filling spaces between roots and fallen trees.

The park shuttle will let you off by parkland near the edge of Bullocks Corners. The park here is manicured, part of the Bruce Trail, and features pavilions and picnic areas and views like the Cobblestone Bridge, which carries a path over Spencer Creek just above Webster (or Websters or Webster’s) Falls. Views of the falls are available at a convenient lookout, and the falls are considered “scenic and reliable” – flowing consistently year-round.

Head back to the shuttle drop-off, but if you have time continue past it to through Greensville Optimist Park to the Optimist Trail that follows Spencer Creek upstream back to Christie Lake along the Crooks Hollow Conservation Area. This walk will take you past the ruins of the many stone buildings and infrastructure that once made Crooks Hollow and Spencer Creek thrive. 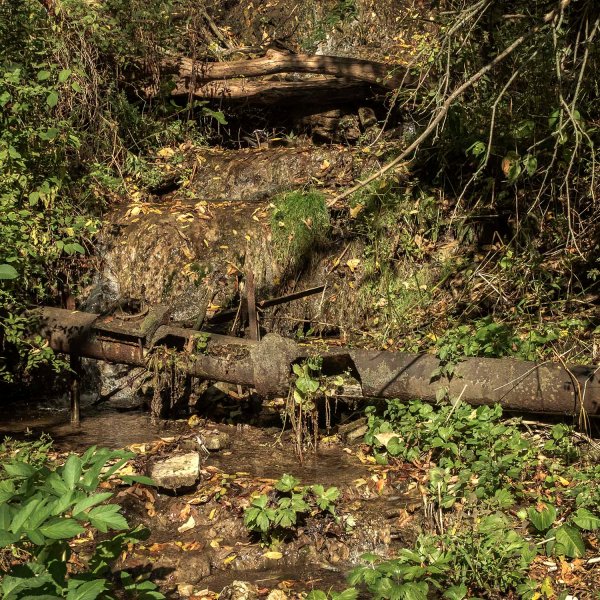 This is the landscape of the relatively flat plateau at the top of the Niagara Escarpment, and while there are suburbs occasionally visible along the way, the traces of the industries and businesses powered by Spencer Creek are harder to find, which includeslong segments of a mysterious iron pipeline that follows the banks of the creek for a long stretch of its length upstream.

The hike back to Christie Lake isn’t as dramatic as the shorter paths around the falls, but it’s a slow, level trail that passes through a landscape that changes regularly, from wetlands to woodlands to sumac groves to lake shore.

You’re more likely to meet locals walking dogs than visitors taking selfies along here, which makes it a wonderful place to relax and clear your head and your lungs. It was so enjoyable that we ended up missing the attractions of Christie Lake altogether while drinking in what turned out to be the zenith of autumn in southern Ontario this year. 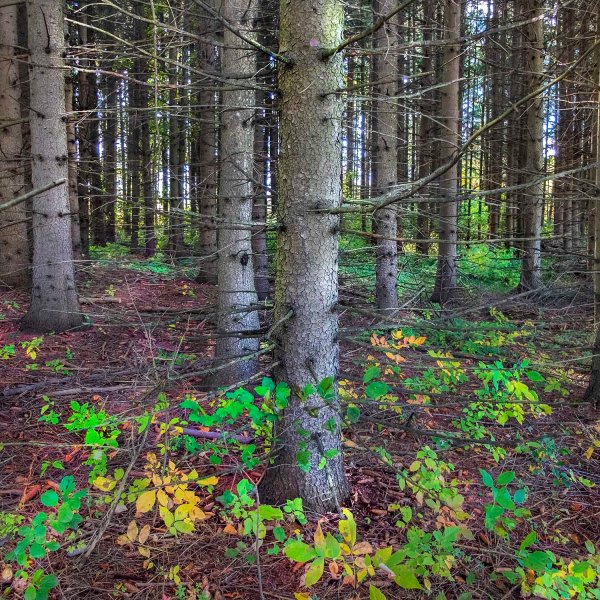