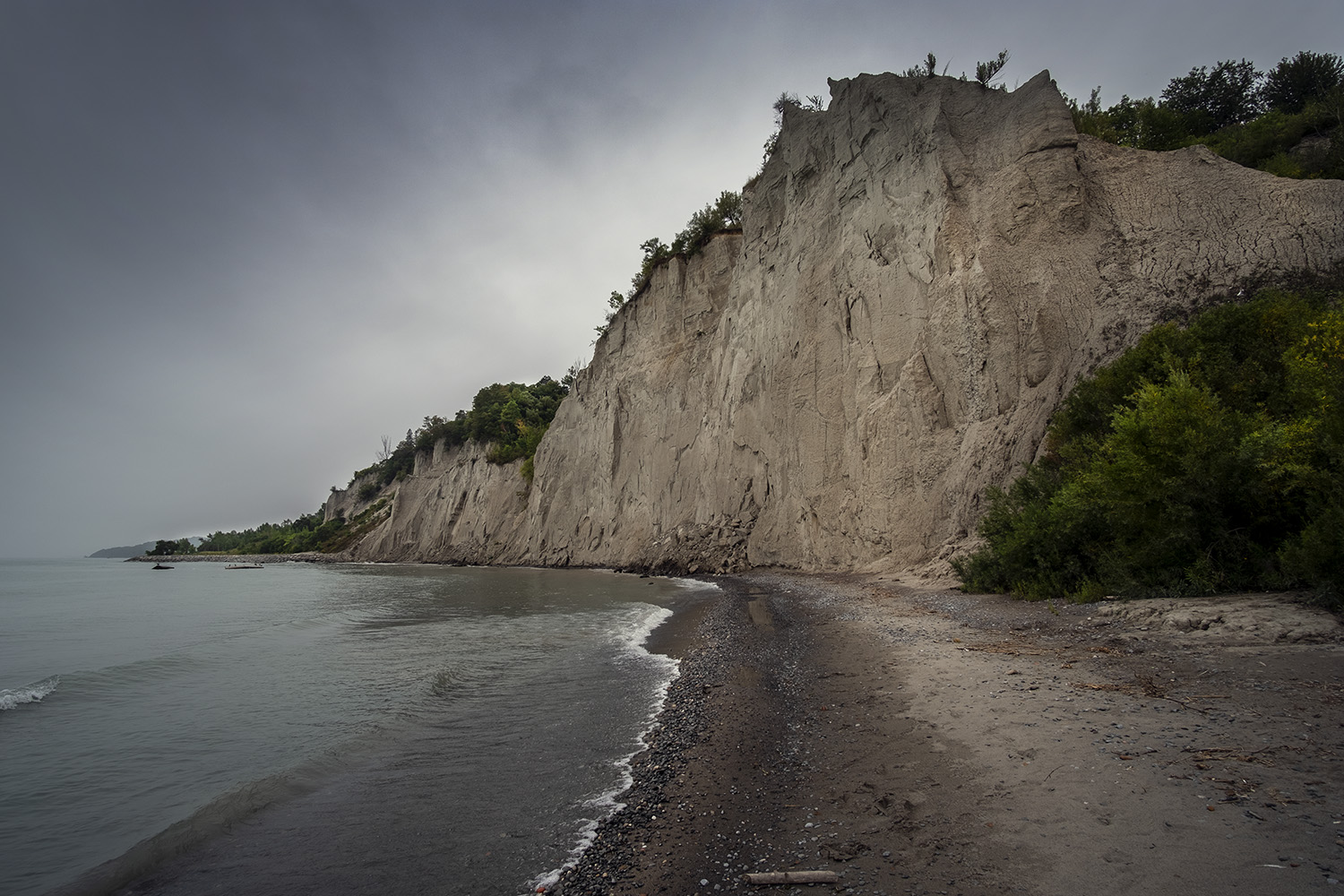 IF TORONTO WAS NEW YORK CITY Scarborough would be the Bronx: vast and distinct and with a chip on its shoulder, it stands apart from the downtown, separated by a river and possessing its own unique geography. And the geological feature that would feature most prominently on any map of Scarborough would be the Bluffs, a long stretch of Dover-like cliffs eroding slowly – but not slowly enough – into Lake Ontario.

The Bluffs were called “Les grands Ecores” by the French, before Elizabeth Simcoe, the wife of Toronto’s colonial founder, named the whole area Scarborough, after the coastal Yorkshire town. The Bluffs themselves came into existence much earlier, as part of the shoreline of the glacial lake that covered much of Toronto after the last ice age. It’s only at this stretch of the lake shore well east of the downtown that this bit of geological history reveals itself so dramatically.

It’s a misty, overcast day on the trailing edge of summer when I arrive at Bluffer’s Park, a place I’ve only ever visited once before. It’s just one of a series of public parks along the edge of the Scarborough Bluffs, but it’s the only one with an easily accessible beach and a convenient way of taking in the vista of the Bluffs from the water.

There are plenty of photos online of the Bluffs from the top, but after a big chunk of the cliff face at Bluffer’s Park fell into the lake in broad daylight this summer, access has been limited and there’s a $5000 fine for trespassing on the paths at the edge of the Bluffs.

The park officially opened in 1975, though Scarberians (for that is what they’re unofficially called) have been wandering on and around the bluffs for over a century. A breakwater was built to slow the erosion, with a picnic spot and lookout point where most photos of the Bluffs get taken. Work on the park is ongoing, but the Bluffs will continue, with every rainstorm and winter gale, to recede slowly inland.

While the cliff face looks like rock, it’s really just a twenty-five storey layer cake of compacted alluvial deposits. Given another million years or so it might have turned into sedimentary rock, but right now it’s part of the active process of creating more Toronto elsewhere – the sand washed away from the Bluffs is the reason why the Toronto Islands far to the west even exist.

Development of Bluffer’s Park created marinas and a public beach, but the most overlooked part of the whole park are the pathways around the storm water ponds right near the Bluffs. It’s a lush wetland, full of towering rushes and grass and a profusion of wild flowers – mostly asters and goldenrod on the early September day I visit. Despite the long walk in from the nearest public transit, a visit to the Bluffs will always be rewarding, mostly because it will never look the same from one season to the next.