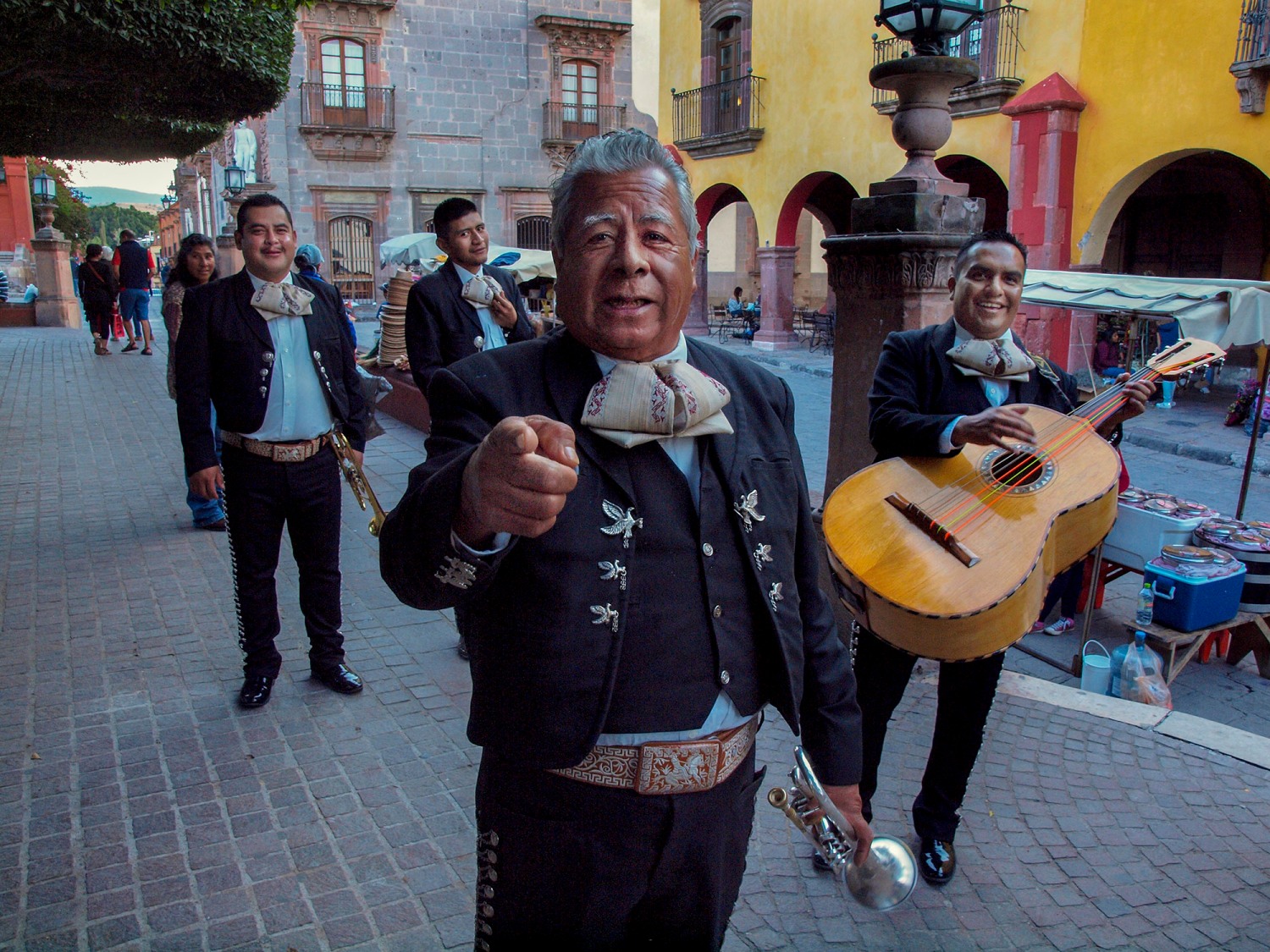 THERE ARE PROBABLY PEOPLE WHO STILL THINK THAT MEXICO IS ONE BIG ALL-INCLUSIVE BEACH RESORT. Thankfully – at least for those of us who don’t tan or can’t swim – it’s a much bigger country than Cancun, Acapulco and Cabo. Which is why I was grateful that my introduction to Mexico began in the middle of the country, in a landlocked colonial town, rich with history and without a cabana or a scuba lesson to be found anywhere.

San Miguel de Allende is nearly 275 km from Mexico City, and the kind of place that other Mexicans will visit as tourists. It’s known for a lot of things, but it’s iconic in Mexico for its central plaza, the Jardin Allende, and the church that looms over it and the rest of the town – La Parroquia de San Miguel Arcángel. The Parroquia is a fairly traditional Mexican church, except for its façade – a soaring Gothic fantasy in warm, rosy stone designed in the late 19th century by Zeferino Gutierrez, a local bricklayer and self-taught architect.

Chances are you’ve been in places where the town square has fallen into disrepair, the centre of life having moved somewhere else. That isn’t the case in San Miguel de Allende. The square’s famous laurel trees, trimmed into great topiary discs, provide shade and shelter for pathways and benches that are never empty. The square is used all day long, beginning in the morning, with art classes sketching with their stools and easels or a marching band from a local school practicing in the opposite corner of the square.

It’s a tourist destination, to be sure, with native Otomi or Nahua selling handicrafts on the steps of the church. But that hasn’t kept locals from the square – they’re also here, enjoying a midday break or a having a rest on their way across the city by foot. (It’s a very walkable place.) The town might have experienced hard times – it was nearly abandoned following an influenza pandemic at the beginning of the last century – but the square’s vital social function was never lost.

It’s in the late afternoon and evening, however, when the Jardin Allende really comes to life. The benches and pathways fill up at the end of the work day with locals enjoying the cool air, while the perimeter of the square is taken over by bands of mariachis. These quintessentially Mexican musical groups play for tips and charge for requests. They take turns performing, competing on at least one evening with a group of breakdancers who set up in front of the steps to the church.

I spend a hundred pesos to convince one band to move to a slightly more scenic part of the park for photos. In response I’m treated to a song that frequently mentions a “gringo” and features a refrain of “chinga tu madre.” It gets a big laugh from the crowd every time, and it doesn’t take long to figure out that this serenade might be meant for me. For the photos alone, though, it was still the best hundred pesos I’ve ever spent.

After the sun sets the fun really begins, especially near weekends when wedding parties from Mexico City and elsewhere parade through the streets behind mojigangas – larger-than-life puppets that lead processions of mariachis, family and wedding guests through the streets by the square. A Spanish tradition exported to Mexico, they’ve become a major attraction for brides and grooms in San Miguel de Allende, with puppet avatars made up to resemble the happy couple. With the flurry of wedding parades over by late evening, the square is reclaimed by locals enjoying an evening stroll, and the inevitable, very welcome street food carts.

San Miguel de Allende is built on the site of a Chichimeca village, which was colonized by the Spanish in the 16th century, but only after a false start and a rebellion. It’s one of the most well-preserved Spanish colonial cities in all of Mexico, full of baroque and neoclassical architecture, the narrow streets running between high walls of vividly painted plaster, opening every now and then to a plaza and a church. They say there are two thousand doors in the town, each opening up onto a hidden courtyard. Many of these were the town homes of wealthy landowners; by the middle of the 18th century, fueled by mining and agriculture, San Miguel de Allende was richer and more populous than New York or Boston.

While the Parroquia dominates the skyline, you can navigate your way around most of the old town by the spires of the churches that fill the streets. Some are small parish churches, while others are much larger, built as part of monasteries or convent or hospital complexes, and they’re loaded with spectacular stonework and decoration, much of it expressing Mexico’s unique, rather fervid version of Catholicism. After surviving centuries of upheaval, their preservation ended up being assured with the country’s 1926 nationalization of church properties, at the beginning of the moment when San Miguel de Allende’s heritage became key to its identity.

There are, they say, no fast food chains in San Miguel de Allende. (I’m not sure if the Starbucks a minute’s walk from the Jardin Allende counts.) But there are plenty of restaurants and shops, from the ones around the plaza selling souvenirs and Oaxacan silver to the market stalls of the Mercado de Artisanias, where you can get everything from flowers, herbs and pastries to shoes and hats. Prices might be slightly higher than in other parts of Mexico, but a dollar still goes a long way here.

San Miguel de Allende became a hub for artists a hundred or so years ago for the usual reasons – it was lovely and old, and the cost of living was low. Expats began arriving here not long after, with a Peruvian and an American founding the Escuelas de Bellas Artes, also known as the Centro Cultural Ignacio Ramirez or El Nigromante. Housed in a former convent, it features fantastic murals all over its walls by David Alfaro Siqueiros and his students. Americans moved here to study art on the GI Bill after World War Two, and the beatnik movement arrived in 1960 when Jack Kerouac, Allen Ginsberg and Neal Cassidy spent time in the town, Ginsberg reading his poetry at the Instituto Allende while Kerouac and Cassidy hung out in a local cantina. Cassidy would later die here.

The town’s ongoing bohemian reputation is embodied in places like Fabrica la Aurora, just outside the historic centre. It was originally a textile factory, the family business of Francisco Garay, and after it closed in 1991, Garay reopened it as a shopping mall for art, with galleries, shops, cafes and studios where artists can create and sell their work. His widow, Rosemary, still runs it today, and it’s a fantastic way to spend much of a day, visiting studios and looking at world class art in galleries like Skot Foreman’s, where you’ll find work by Alexander Calder, Jean-Michel Basquiat, Peter Max and Salvador Dali.

The growing prosperity of San Miguel de Allende is on display at Dôce 18 Concept House, an upscale shopping mall built around a series of old courtyards on Calle Relox, not far from the Jardin Allende. It’s a maze of restaurants and shops, selling high end Mexican fashion and jewelry and showcasing the products of small local distillers and wineries in exquisite little spaces. Upstairs is L’Ôtel, a boutique hotel on the second floor featuring exquisitely designed rooms and a patio and pool for sun worshippers missing their beach time.

Mexico is a great country for food, and San Miguel de Allende is a great town for eating. From street food to fine dining, you’re spoiled for choice; one highlight was an elaborate pozole in a rooftop restaurant overlooking the Parroquia. (Among the toppings served: ant’s eggs. Don’t judge till you try them.) Another was Panio, a bakery just by my hotel, where Claude Petit produces a superb selection of traditional pastries and bread every day, with Cumpanio, a sit-down eatery next door that serves breakfast and lunch mixing continental and traditional Mexican recipes. Petit’s kitchen was a great start to long days of shooting, and he’s since expanded into a chain with locations in Queretaro and Guanajuato.

Just outside of town is the Sanctuario de Atotonilco, a fortress-like church complex that was made part of the same UNESCO World Heritage site that includes the historic centre of San Miguel de Allende. Built in a Mexican baroque style in the 17th century, it contains a vast complex of chapels and annexes covered in the beautiful murals that provoked its priceless heritage status. It’s a pilgrimage site as well as a place drenched in history – this is where Ignacio Allende was married in 1802, and it was a focus for the rebels during the War of Independence before Allende was captured and executed by the Spanish colonial government. The church complex is stunning, but make sure you explore the grounds outside, once the site of spring-fed gardens, now fallen into ruin.

Driving further north it’s worth visiting the Cuna de Tierra winery, just outside the town of Dolores Hidalgo. The high altitude region of Guanajuato is perfect for grapes and olives, so Don Juan Manchón and Don Ignacio Vega began planting vines here over twenty years ago. On the way the winery has won a host of awards, not just for its wines but for its crisp, clean modernist architecture in gleaming concrete, where wine tastings and tours can be booked.

The contribution of expats to San Miguel de Allende is exemplified by Finca Luna Serena, an olive farm just 15 minutes from the centre of town. Retired Madison Avenue ad execs Victor Gutierrez and Susan Chamberlin had to decide between Tuscany and Mexico to pursue Susan’s retirement dream, and chose this lovely little farm to grow their range of sweet, nutty olive oils. You can book tastings and tours and lunches in their home, as well as overnight stays in a family cottage.

There are places all over the world you love to visit, but only as a tourist. Rarely, though, you spend time in a place that makes you wonder what it would be like to live there, at least part of the year. It’s obvious that I’m not the only person who wandered around San Miguel de Allende and had that thought. The benefits really do outweigh the negatives in a place like this, if you have a fondness for food, art and history – and can live without the pressure of getting your towel on a lounger before everyone finishes breakfast. There is, after all, more than one way to escape winter.

Rick McGinnis was hosted by the San Miguel de Allende Tourism Board, which didn’t review or approve this story.